After Bradley McCue, a Michigan State University junior, died of acute alcohol poisoning while celebrating his 21st birthday, his parents and friends founded the B.R.A.D. (Be Responsible About Drinking, Inc.) Foundation. The organization is a Michigan non-profit corporation dedicated to providing students and parents information about alcohol’s effects and how to deal with excess use. 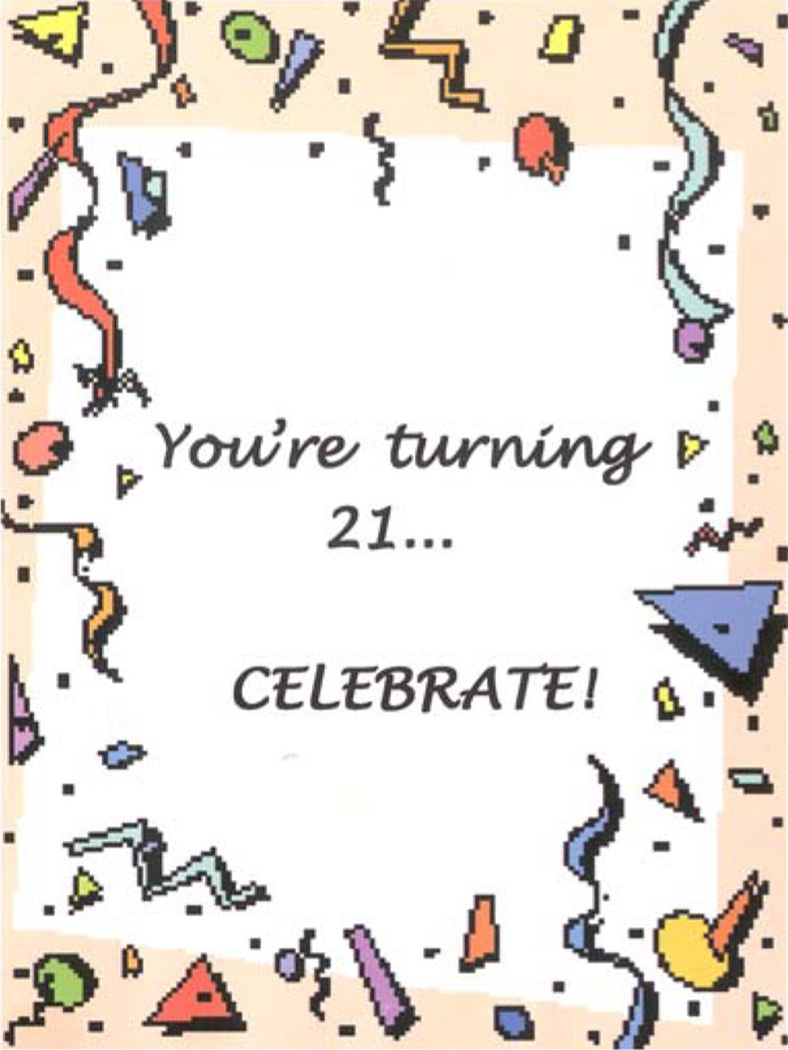 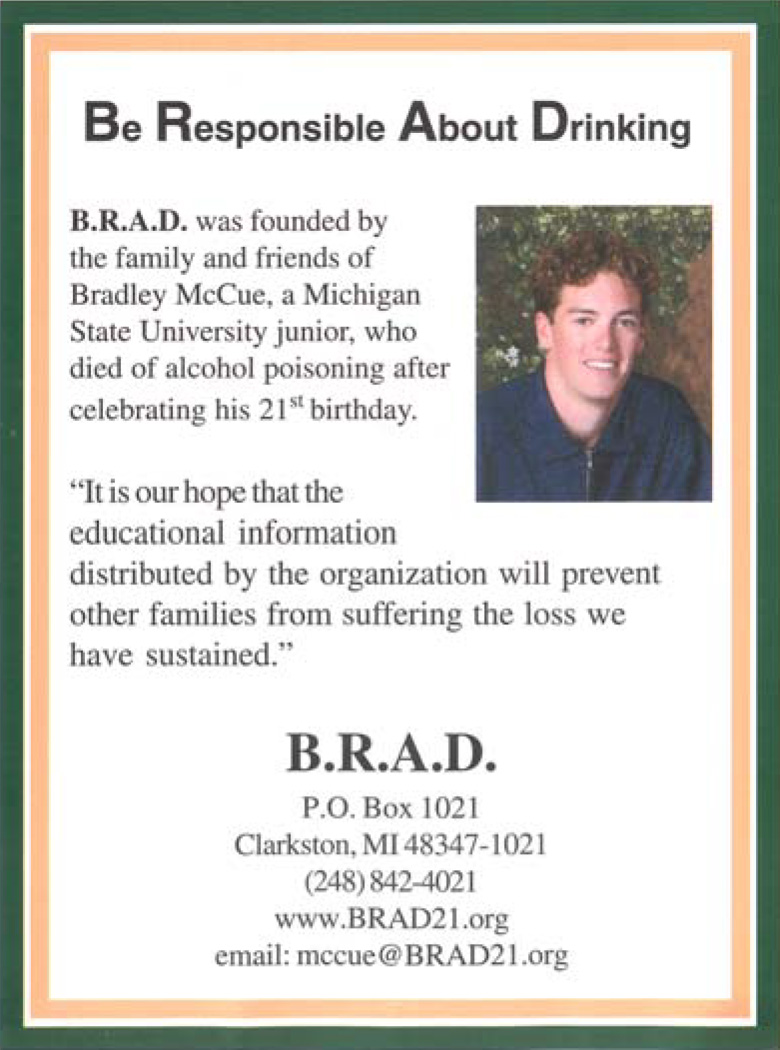 In April of 1999 MSU and B.R.A.D. began sending birthday cards to students just before their 21st birthday reminding them to celebrate responsibly. A laminated wallet sized card with information about alcohol poisoning is included with the birthday card. (Appendix A: birthday card) Over the last three years 15, 000 MSU students have received one of the birthday cards.

As part of a study by MSU Olin Health Center ​and the College of Communication Arts and Sciences, funded by a grant from The U.S. Department of Education 1731 students were surveyed within two weeks of their 21st birthday during the 2001-02 academic year. The survey data for the project were collected by the Office for Survey Research (OSR), a division of the Institute for Public Policy and Social Research (IPPSR) at MSU. OSR conducted the survey on behalf of Drs. Dennis Martel and Charles Atkins, the principal investigators. (see Appendix B: Methodological report) 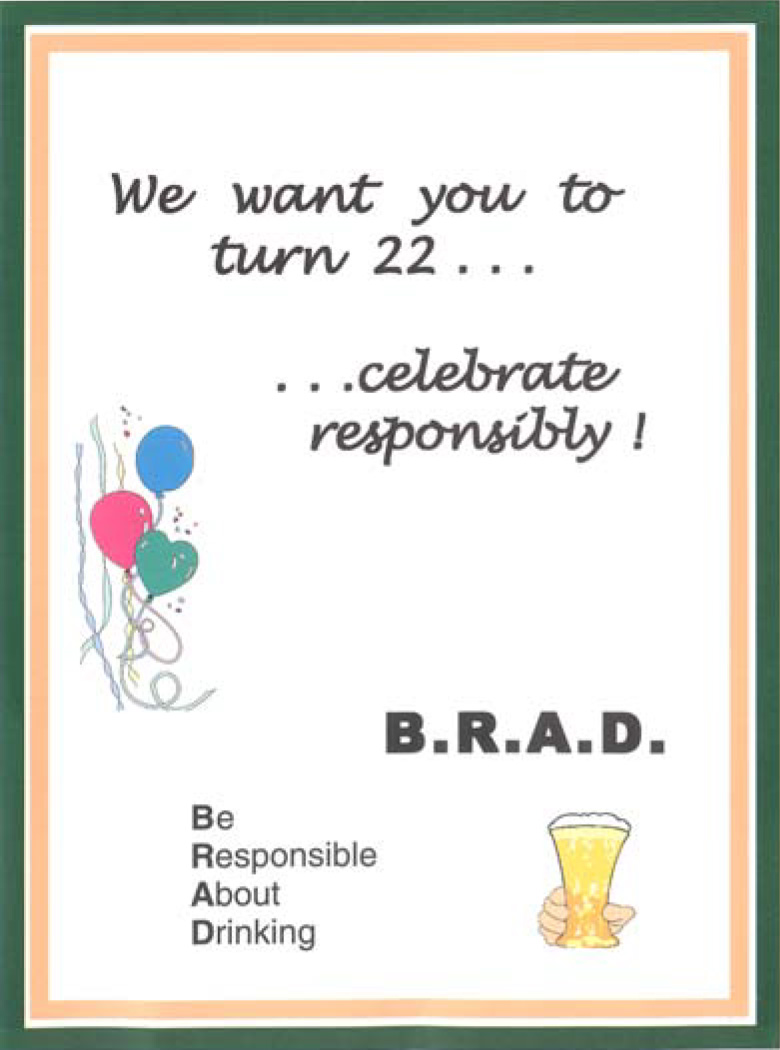 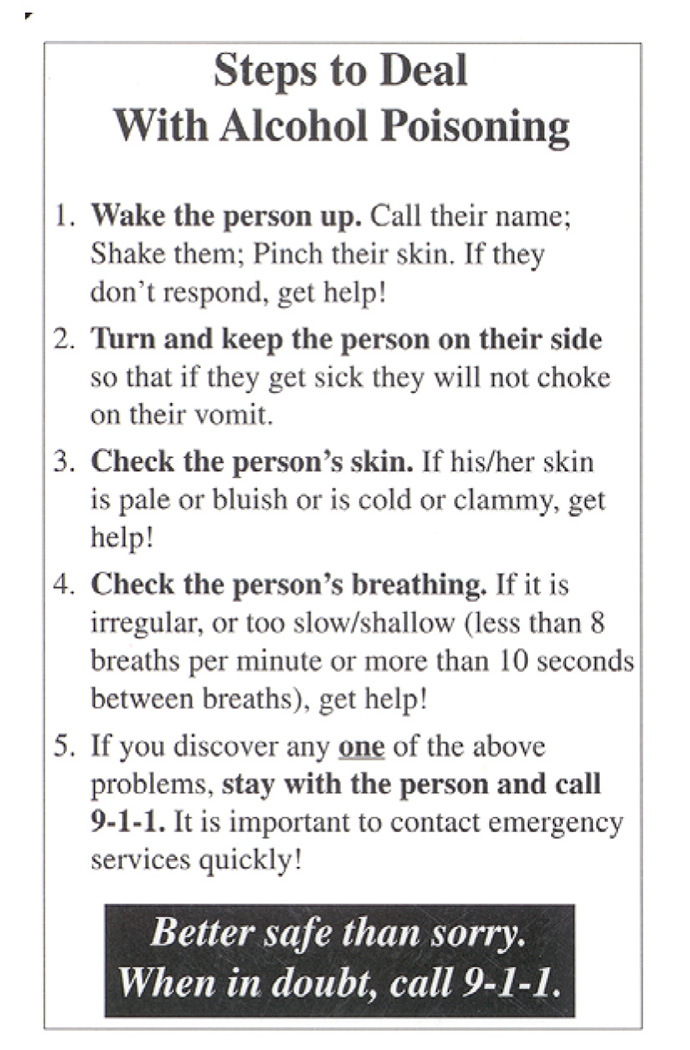 Of all students turning 21 during the study, random students were selected for each group. A control group received no card. All others received the standard B.R.A.D. card or a card with a gender specific or gender neutral insert of alcohol facts. All of the students also received the laminated wallet size insert.

Within two weeks after their 21st birthday, the students were asked an extensive set of survey questions on how they celebrated their birthday. Included were a series of questions about the B.R.A.D. birthday card, its wallet insert and the additional inserts. (See Appendix C: Numbers of students surveyed) 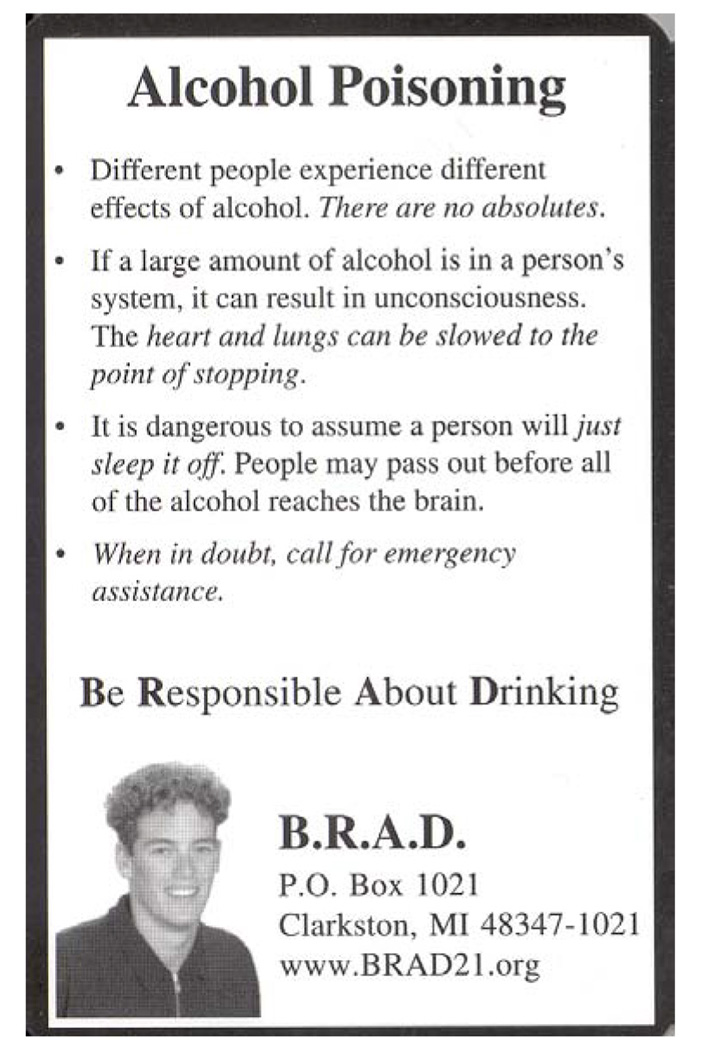 As an additional part of the study, parents of some students received a letter congratulating them on the upcoming birthday of their son or daughter. That letter also asked the parents to have discussion with their child about the dangers of drinking large amounts of alcohol as part of their birthday celebration.

A preliminary analysis of the survey results follows with supplemental data. (See Appendix D). A more detailed analysis of the extensive data will be completed and a comprehensive report issued later this year.

Highlights of the survey:

Of the 1731 students surveyed:

Students who received the birthday and wallet cards (vs. those who did not):

Of the students who recalled receiving the cards:

Information on the results of the B.R.A.D. Card Survey are available below in Adobe Acrobat Format. (You can download the Abobe Acrobat Reader for free, here).